You are using an outdated browser. Please upgrade your browser to improve your experience.
by Staff Writer
April 21, 2010 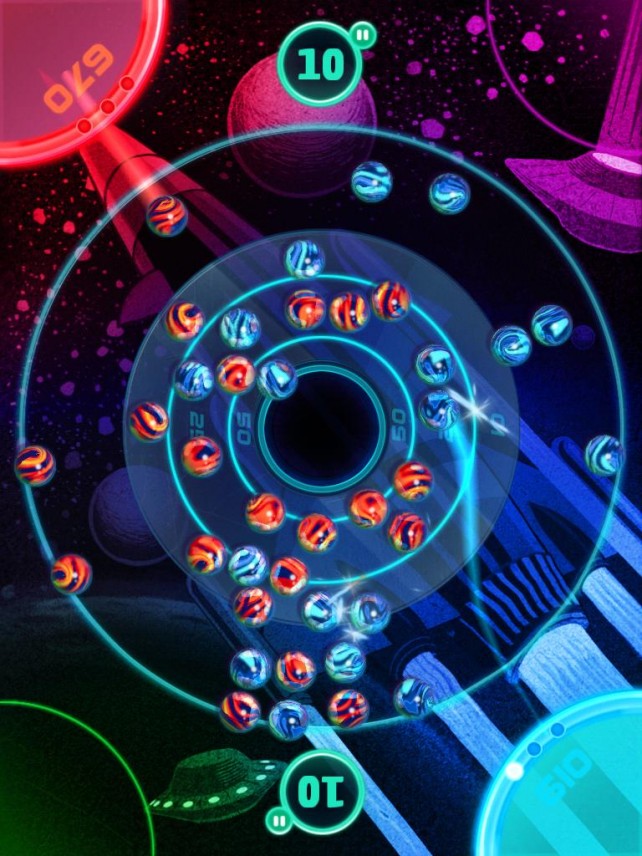 Party Place - Marble Mixer is a game designed exclusively for the iPad. There are three game styles of flicking marbles on to point mats. The game is made with multiplayer in mind to gather people around an iPad. 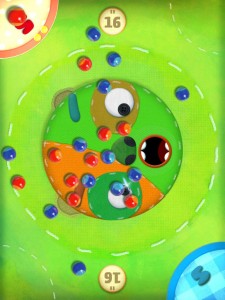 The game features three game modes with the first being Table Tactics where there are three score zones in the middle going from 10, 25, and 50 moving towards the hole in the middle. You have ten marbles, and you try to score as many points as you can. Next is Monster Picnic where you try to shoot marbles into the mouth of a monster that rotates 360 degrees, and you try to shoot as many marbles as you can in 60 seconds. Finally is Space Mania which is set up similar to Table Tactics, but has a space theme and as many marbles as you can in 60 seconds. Every mode supports up to four players on one iPad with a marble shooter in each of the four corners. The controls are simple as you just flick from the marble to shoot it. 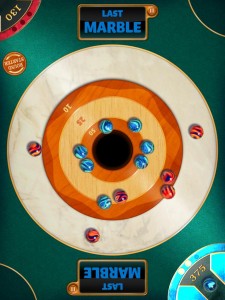 This is one of the few games I've come across that is designed for the iPad exclusively, and it does well because of that. Rather than an HD version of an iPhone game, this is an iPad game only possible on the added screen real estate. The screen is filled with the intricate marble boards giving you the appropriate space to estimate an appropriate flick to reach a good score. The game is all about multiplayer, and it's amazing on the iPad. It's great to gather friends around the iPad all flicking marbles across the board colliding with each others. You can easily gather four people around an iPad, as an iPhone obviously wouldn't be possible. It's so hectic in the fast paced games as you're both trying for the same board area, and can knock each other off, and gain points from knocking opponent's marbles into the middle hole. 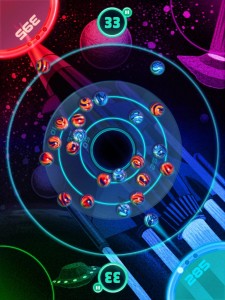 All three of the game modes provide different fun and challenges. There is the more methodical challenge of Table Tactics, and then the more action of Space Mania. Monster Picnic provides a whole different challenge as you need some precision, but still speed. The controls work so well so you can appropriately flick the marble as far as you want. It feels so natural as though you can be in control of adjusting your flick to try to land on the fifty point inner circle with the power used perfectly recognized. If you want to flick hard to smack an opponent’s marble off the board the game picks it up exactly. Another great aspect is that you don't have real marbles spreading all over as they're all digital. 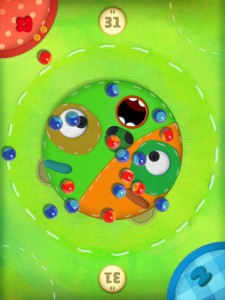 The game is wonderfully designed with each of the three marble tables packed with detail. The marbles are great to see with each one having their own polish, and so intricately designed. As marbles collide flares burst out, and this looks amazing when there are multiple collisions at once. The physics engine is really well done so the rolling of the marbles seems completely authentic. On collision the marbles interact as you would think, and roll of a spinning table perfectly. Each of the three tables includes its own soundtrack which are all nice listening to enhancing the fun. 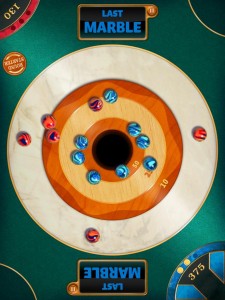 The biggest concern was that initial load times were about 45 seconds. An update has been released that cuts that time to around 10 seconds which is so much better. As great as the multiplayer is, the single player is lacking. The single player is the same game, but lacks the competition of an opponent, and there is no option for a computer opponent. It would be great if there was some type of single player levels or varying gameplay mechanics for the three different game boards.

Party Place Marble Mixer is an amazing game for the iPad giving you an experience like none other. It’s beautifully designed with realistic physics giving you super smooth controls. The game is perfect for multiplayer to play one of three great gameplay modes, and play with up to four players on the same iPad with marbles colliding all over the place. Party Place Marble Mixer is a must buy for $4.99 giving you an iPad exclusive experience that is so much fun, and gathers friends and family around an iPad.