You are using an outdated browser. Please upgrade your browser to improve your experience.
by Bryan M. Wolfe
June 30, 2011
The next “iPad killer,” the HP TouchPad, is set to debut tomorrow, July 1. So far, however, it appears Apple has nothing to worry about, as the general consensus among reviewers is the tablet isn't much to write home about, at least as a 1.0 device. Since it debuted in 2010, the iPad has had its share of competitors join the growing tablet market. For the most part, however, these competitors have gone up to the plate and have struck out. Now, the world’s larger PC maker, Hewlett-Packard, is taking its shot at Apple’s top-selling tablet. With prices starting at $499 (the same as Apple’s entry level iPad), the HP TouchPad comes with a 10-inch display and runs on webOS. Both models (16GB and 32GB) offer only Wi-Fi capabilities, although a 3G/4G model is expected in the future. While The Wall Street Journal’s Walt Mossberg praises the HP TouchPad for its “clever interface,” he doesn’t like its battery life, which he's concluded is just 60 percent versus that of the iPad 2. Meanwhile, David Pogue of The New York Times opines the new tablet “doesn’t come close to being as complete or mature as the iPad or the best Android tablets.” He concludes you’d be “shortchanging yourself” for buying a HP TouchPad unless “you’re some kind of rabid A.B.A. nut (Anything but Apple.)” Based on these reviews, and others linked below, it looks like the “iPad killer” could still be coming, but it won't be arriving today. Feel free to read some of the other reviews here: What are your thoughts on the HP TouchPad? Let us know by using the comments below. 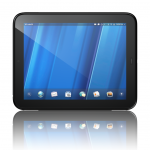 Pogue: New "iPad Killer" Only Good For "Rabid A.B.A. Nuts"
Nothing found :(
Try something else