You are using an outdated browser. Please upgrade your browser to improve your experience.
by A.T. Faust III
May 9, 2012
Ever since iOS 5 went live last year, we've been receiving alternative app requests on the heels of complaints that Apple utterly ruined the iPad's native Music experience. For whatever reason, Cupertino engineers decided to shrink down the default length of the Music app's cursor track, and this made (and still makes) it extremely difficult to navigate songs and audiobooks and podcasts with any sort of reliable precision. And the longer the audio file in question, the more difficult getting around becomes. Folks are frustrated, typified by our most recent email on the subject:

Hey guys! My mom is listening to university lectures via the music app on her ipad, but the slider is so small and difficult for her to use. Do you know of any programs that can substitute the music app so its easier for her to slow down, rewind, fast forward podcasts...with a larger slider?

The process of moving within an audio file or tape to locate a particular section. The term originally comes from the days of reel-to-reel players, when rocking a reel would give the impression of scrubbing tape across the head. Many audio scrub tools today allow the user to drag a cursor across the wave form to audition different sections of an audio file.

In other words, scrubbing comprises what you already know as fast-forward and rewind. Only, in iOS, you can alter the scrubbing rates to gain second-by-second, pinpoint precision. Of course, as with many things making the jump to all touch- and gesture-based inputs, Apple's implementation of scrubbing on the iPad is totally hidden and largely counterintuitive. There is no metaphor to support the actions required, and there's nothing in the interface to tell you that the feature even exists. Curiously, the iPhone Music app actually provides an instructional scrubbing overlay anytime you move the cursor (including four speeds: hi, half, quarter, and fine). However, since this overlay still doesn't tell users what the term actually means (scrubbing is not yet fixed in the popular consumer lexicon), many people pass it by, and even fewer make the logical connection that the feature must exist on the iPad as well. I certainly didn't. Instead, like most people, I happened upon it entirely by accident. Here's how to find it on purpose: First, launch your iPad's default Music app, and play an audio track. Then, tap and hold on the moving cursor at the top of the screen. Keeping your finger up top, drag left and right throughout the track. You'll notice that the timestamp moves very quickly. Now, while still touching the screen, move your finger down and then repeat the left-right motion. The cursor moves a bit slower. Go lower on the screen, repeating the process. The timestamp moves slower still. For the finest control, move all the way down to the bottom of the screen. Works like a charm! (Update: For video and audio players where the slider is on the bottom of the window/screen, simply reverse direction, moving further up for finer and finer control.) Check out the following tutorial, and you'll quickly get the hang of it. Just remember, while scrubbing's not enabled for this particular shoot due to its short length, most multi-minute videos will offer the feature. Since these hidden scrubbing gestures are built into iOS, you'll find that they work in a wide variety of apps. Most videos viewable through iOS also employ the function, and I've confirmed it to work on my iPad in apps like Mobile Safari, YouTube, Netflix, AppAdvice, Adult Swim, and Snag Films. Indeed, chances are that nearly every media app follows suit, so you should never again be stuck wasting 30 seconds here or a minute there as you sort through the scatter for your favorite segment or scene. For most of you, this efficient little trick is sure to save you lots of time. However, if your beef with iOS 5 is instead that Apple killed off 4X playback, heaven help you. Maybe lay off the coffee, huh? [Image: gadgetwise.com] 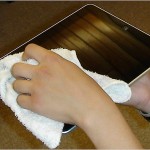 How To: Fast-Forward And Rewind With Precision In The iPad Music App, Others

How To: Fast-Forward And Rewind With Precision In The iPad Music App, Others
Nothing found :(
Try something else