You are using an outdated browser. Please upgrade your browser to improve your experience.
by Aldrin Calimlim
May 23, 2012
More and more additional Mac OS X features are being discovered in the preview versions of Mountain Lion, the next major release of Apple's popular desktop operating system. Just a couple of days ago, the likelihood of iOS-like automatic app downloads in the upcoming iteration of OS X was made apparent. This time around, we're getting initial confirmation, courtesy of Gear Live, of offline mode support for Reading List on Safari running on Mountain Lion. Not to be confused with the just-announced Readlists Web app, Reading List is a feature of Safari that was first launched on OS X Lion and iOS 5 last year. It's a clutter-free (with the aid of Safari's Reader feature) article bookmarking service similar to Instapaper, Pocket, and Readability. However, it has the main distinction of being integrated within Safari rather than having its own native app. Another distinction Reading List has is its lack of support for offline reading, which has long been a selling point of the aforementioned third-party services. As it turns out, though, that void is about to be filled by Mountain Lion. While you're connected to the Internet, you can freely add Web articles to your Reading List either for reading later or some other bookmarking purpose. As evidenced by the screenshot above, items in your Reading List will begin to be available for offline access in Mountain Lion, thanks to a little bit of caching. At present, offline mode is not yet on tap on iOS. It's safe to assume, though, that integration of this feature into Apple's other operating system is underway. Personally, I lean towards Readability for my no-frills Web article reading needs, whether online or offline. Even so, I think the introduction of the feature in question, which should have been available right from day one of Reading List anyway, is a pounce in the right direction for Mountain Lion. Will you be using Safari Reading List more often following its addition of offline reading support? Source: Gear Live Via: 9to5Mac 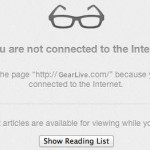 Offline Support For Safari Reading List Tracked Down In Pre-Release Mountain Lion
Nothing found :(
Try something else