You are using an outdated browser. Please upgrade your browser to improve your experience.
by Dom Esposito
August 5, 2012
Console-style 3-D games have become increasingly popular on iOS devices. While these games can be enjoyable on a touchscreen, they lack the precision that a physical controller offers. There’s a new Kickstarter project in town that has the potential to add the perfect controller to encourage your iPhone gaming addiction. Bladepad is an iPhone-based controller that could change iOS gaming for the better if it ever takes off. It needs your help to come to life, but will it receive the attention from game developers that it deserves? According to the Kickstarter description:

Bladepad has all the right ingredients to be an awesome controller for iOS. The problem with Bladepad, and all other iOS controllers, is getting game developers on board. Bladepad’s creators claim they already have the support needed:

Bladepad will feature game support from both top studios and indie game makers (think 'top action/adventure and sports games on iOS.') Expect Bladepad to have the game support of a popular handheld console.

I’ve seen quite a few promising iOS controllers surface, but none of them seem to catch on. Most of the blame gets put on the controller manufacturers, but it’s the game developer's support that's needed to make these controllers a standard. For $69 you can back this new Kickstsarter project and get your hands on an “Early Adopter Bladepad." If you decide to back this awesome controller, I suggest sending an email to your favorite iOS game developer and letting them know about Bladepad. The iOS community can help bring this new controller to life, but Bladepad needs the support of the industry to make it a gaming standard. 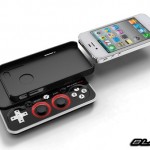 Bladepad Could Change The iOS Game But Will It Ever Take Off?

Bladepad Could Change The iOS Game But Will It Ever Take Off?
Nothing found :(
Try something else