You are using an outdated browser. Please upgrade your browser to improve your experience.
by Bryan M. Wolfe
June 27, 2010 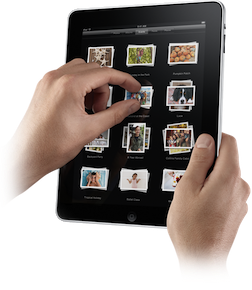 Having used the new iOS4 on my iPhone 4 for the past few days, I have quickly found what I like and dislike regarding the new OS. To me, as a heavy iPad user, having iOS4 on my iPhone has made me question and anticipate the expected fall release of iOS4 for iPad even more. I'm hoping many of the features I've come to like on my iPhone 4 will make it to the iPad.

While Apple has been pretty quiet about what features will ultimately be carried over to the iPad, we can certainly make our opinions known to Apple, just as I will here. First and foremost, we should expect that fast app switching and multitasking will make the move to the iPad in some form. Using the Apple tablet is a terrific experience but it currently has its limitations. Not only does it get tiresome to go from app-to-app (especially when you have to swipe your finger to get to the necessary app page), but I have found that whenever I get an alert (say from instant messaging) and have to click off from my current app to move to another, the process proves even more frustrating. Who hasn’t been in the middle of using one app, had to switch to another, only to find that you must start again at the beginning on the previous app when you go back to it? Extremely frustrating! As much as the fast app switching and multitasking features are needed on the iPad, how they work on the iPhone platform might not work as well for the iPad. In particular, I have a hard time envisioning double clicking the home button so that my most recently used iPad apps pop-up. Not only could this list prove lengthly, but a whole lot of real estate would be taken up since all of the apps listed on a page would suddenly go grey and become useless. While this process looks great on the smaller iPhone screen, on the iPad, not so much. I would be thrilled to see a recent app page included in the iOS4 release for the iPad that would enable users to restart already opened apps. This would be easier to use than the fast app switching process of the iPhone 4, and it would make it much clearer to the user which apps are already open. Please review my previous article on the differences between the terms fast app switching and multitasking since the two are not interchangeable, though Apple seems to think they are. Expect multitasking to move to iPad very soon, though in what form remains hidden in the offices of Apple for the time being. Another great feature sure to make the move from iPhone to iPad is the ability to arrange apps into folders. I have found this to be a terrific tool on my iPhone 4 and I have quickly created a number of folders which has cleared space on my screen, as well as helped me organize better. Apple does a lot of the leg work by automatically naming the folders. iOS4 suggests a folder name by default based upon what type applications are placed in it, this is another plus. Unified inboxes are another strong possibility on the iPad. I was surprised by this feature when it was presented to me on my iPhone 4 and it took me a while to get adjusted to the new feature. It did not take me long to fall in love with it. I currently have four email addresses and by unifying them into one inbox, makes my job that much easier to read and/or delete emails as they are delivered. On the iPad, I would expect a similar function and can’t imagine that it would look very different than on the iPhone. Perhaps the one option that many would like on the iPad that might not be possible is tethering. Many users were disturbed at the iPad debut when they learned this feature wasn’t available. I would not hold out much hope that it is coming anytime soon. Not only would it require some heavy lifting on AT&T’s part, but with the iPad only sporting one connector port, it would probably require some type of external device which might be enough to make it a no-go, at least for the current version of the iPad. Another iOS4 addition that would greatly enhance the iPad, but will likely miss this version is the new FaceTime feature. Obviously, the current iPad doesn't have a camera, but if Apple could find a way of connecting the iPad to the iPhone, FaceTime could become a reality. For example, a user could make the call on the iPhone, then view the other person on the larger iPad screen. Imagine the possibilities of having a video discussion with a client and being able to show them a proposal from Pages right through FaceTime. As with tethering, this addition is probably not possible within the current iPad hardware configuration. Finally, there is the Retina display. Putting iOS4 on the iPad will not suddenly change your iPad’s screen specifications to include this remarkable feature. However, its inclusion on the iPhone 4 certainly bodes well for it to make it to the next generation iPad hardware. I would be very, very surprised if come 2011, a new iPad doesn’t include this option. We’re very interested in hearing from you, our readers. We'd like to know what you expect from iOS4 when it comes to the iPad. Please feel free to leave us comments below. Until then, enjoy iOS4 on your iPhone.