You are using an outdated browser. Please upgrade your browser to improve your experience.
by Joe White
July 22, 2010 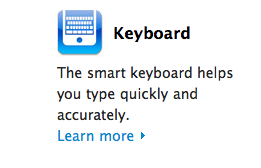 If using the iPhone's keyboard drives you round the bend, then worry not: a touch-savvy fix called BlindType might just be able make your life a whole lot easier. The upcoming application, discovered by Engadget, takes the idea of the iPhone keyboard and intensifies its ability to be inaccurate. By this, I mean BlindType recognizes your errors much more accurately than the built-in iPhone checker does - thus granting users the ability to be all the more inaccurate with their typing. As you can see from the video (below), BlindType is able to understand words that have been typed entirely wrong, and then changes them automatically. Users then have the ability to switch the corrected word with another guess via a bar that appears over the virtual keyboard. In addition to this, the BlindType keyboard also adjusts to the user's typing - growing or decreasing in size, or spinning when necessary. With BlindType, users don't type onto a keyboard; rather, they type onto a screen upon which a keyboard appears in relation to the distance between the imaginary keys you press. If this doesn't quite make sense, then check out this video below and (hopefully) all will become clear:

See what I mean? BlindType is currently still in development, so it's not available in the App Store right now - but we'll surely be posting when it is, so keep your eyes peeled! In the meantime, you can find out more about BlindType by checking out its official site. And, be sure to let us know what you think in the comments bow below! 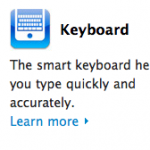 BlindType: It's A Keyboard, Jim, But Not As We Know It

BlindType: It's A Keyboard, Jim, But Not As We Know It
Nothing found :(
Try something else