You are using an outdated browser. Please upgrade your browser to improve your experience.
by Alexander Vaughn
July 11, 2010

I wanted to relay to you an interesting idea I came across on the German iPhone-centric site iPhone-ticker this week. As you know by now, Apple's implementation of multitasking is based on 7 core features. There is Fast App Switching, VoIP, Location, Audio Streaming and so on... These are some very neat features when implemented. Unfortunately, that is often not the case and good luck trying to find out whenever it is anyway.

Indeed, when picking a radio streaming app for example; knowing which apps take advantage of the background streaming API is an important element of the purchasing decision. At the moment however, the only way to find out whether it's the case is to dig through each app's description (given each developer even included that information). Not a very convenient approach you'll admit.

The idea iPhone-ticker puts forward is a system of little badges that Apple could include next to each app's icon. Just like they did with the + sign for universal (officially: fat binary) apps. There could be one for example to indicate whether an app supports "backgrounding", and some text to detail which form. In the process, they could also better display what iDevices are supported. The last idea, a long requested one, would be to include a symbol indicating whether you already own an app or not.

I must admit I like this approach as it would be helpful, but not too messy or complicated. Also, it would promote developers that go the extra-mile with their apps and already support the newest iOS features.

What do you think about it? 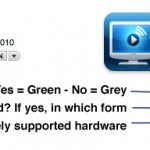 What About Some Feature & Compatibility Badges For The App Store?

What About Some Feature & Compatibility Badges For The App Store?
Nothing found :(
Try something else