You are using an outdated browser. Please upgrade your browser to improve your experience.
by Joe White
August 27, 2010
We all know how important space-saving in any iDevice is - let alone the iPhone, which, when compared with the iPad, is rather limited when it comes to the amount of space available for important Apple components. The iPhone 4 saw the introduction of a bigger battery which apparently occupies half of the space inside the handset's case, which explains the increase in battery life between the iPhone 4 and earlier iPhone models. However, according to Patently Apple, space-saving is still a matter of great investigation. And, one recent patent seems to suggest that the guys in Cupertino have come up with another way of freeing-up some valuable space inside future iPhone handsets. As the site states:

One of Apple's new patent applications published yesterday describes a possible future iPhone audio Jack with built-in mic combination so as to save space should Apple decide to add new ports or future features.

Sounds simple enough, I guess. As Apple's technologies advance, the space inside iPhone handsets is going become more and more valuable. And, even if new components aren't immediately invented, the additional space could allow for an even bigger battery - which would be appreciated. You can check out a full breakdown of Apple's latest patent over at Patently Apple. Additionally, the full-res screenshots for this patent have been included below. [gallery] 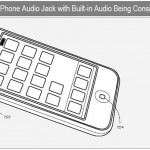 Audio Jack With Built-In Mic Will Save Space In Future iPhones?

Audio Jack With Built-In Mic Will Save Space In Future iPhones?
Nothing found :(
Try something else