You are using an outdated browser. Please upgrade your browser to improve your experience.
by Alexander Vaughn
August 14, 2010
It's the end of the line for Paul Shin Devine, one of Apple's Global Supply Managers. Silicon Valley's MercuryNews is reporting today that Devine was arrested yesterday for leaking information he obtained while working at Apple. He leaked the information about the iPhone and iPod in exchange for kickbacks. Unfortunately, the leaks weren't to us bloggers, Devine's little business was much more profitable. According to the MercuryNews:

The indictment describes a scheme in which Devine used his position at Apple to obtain confidential information, which he transmitted to Apple suppliers, [...]. In return, the suppliers and manufacturers paid Devine kickbacks, [...]. The information enabled the suppliers to negotiate favorable contracts with Apple, according to the indictment. The companies were not named in the indictment, but they were described as suppliers of materials designed for Apple's iPhone and iPod products. They are located in "various countries in Asia," the indictment said, including China, South Korea, Taiwan and Singapore.

How much did he make? Not a lot actually; just over $1 million dollars. When you consider that he's now in serious trouble with the IRS, the FBI, and most of all, Apple (who is now going to sue him), I'm sure it wasn't worth it. Yet, it shows you just how tough it's getting for Apple to keep any secrets, when companies are ready to spend millions for information. Also, it makes you wonder why we are still seeing tight supplies in Apple's new products... 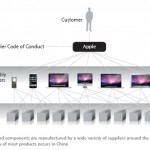 Apple Supply Manager Gets Caught Leaking Information And Taking Kickbacks
Nothing found :(
Try something else