You are using an outdated browser. Please upgrade your browser to improve your experience.
by Joe White
August 21, 2010
If you're an iOS developer who desperately wants to throw some ads in your free iPad app, then worry not: Google has just released a new ad format specifically targeted towards iPad developers (US and Canada). The company explained the premise further, in a blog post:

The new iOS SDK supports ad serving in iPad apps using three of the most common online ad formats, instantly making it easier for developers to grow their businesses and for advertisers to expand their presence to the iPad. Advertisers whose campaigns run on the Google Display Network and include text or image ads in the above sizes can now show ads within iPad applications – provided their campaigns are targeting mobile devices or specifically the iPad.

To advertise on the iPad, developers must be signed up for Google’s AdSense for Mobile Applications beta program. Once signed up, they'll then have access to the ad features in the latest iOS SDK build. However, as MacStories speculates, it may be more worthwhile for iPad developers to just wait for iAds. What do you think? 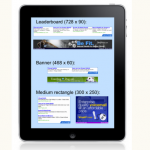 Google Brings Ads To iPads
Nothing found :(
Try something else