You are using an outdated browser. Please upgrade your browser to improve your experience.
by Alexander Vaughn
September 30, 2010
Even a few months after its launch, it can still be very hard to get your hands on an iPhone 4 these days. We've told you about the daily havoc in the flagship London store, yet its pretty much the same story all over the world. Sometimes, it even gets out of hand. Following a surprising move to raise the number (to unlimited) of iPhones that can be purchased by each person, 9to5mac reports, Apple's flagship store in Beijing was assaulted by gray market resellers:

Customers were seen leaving the store with 20-30 iPhones all boxed-up, which they were then seen attempting to sell to passers-by.Inside it was pandemonium, with customers waving their cash about, some jostling — even some fighting between grey market buyers and ‘real’ Apple customers. Inevitably, the police were called.

It led to Apple closing the store temporarily, and now requiring identification from every customer. Each customer can only purchase one unit and it will be opened in-store, as well as being activated immediately to discourage reselling. As 9to5mac points out, this utter iPhone madness is starting to look like ticket sales for a major concert. Apple must be thrilled. 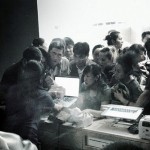 Chaos in Beijing: Apple Forced To Close Store
Nothing found :(
Try something else