You are using an outdated browser. Please upgrade your browser to improve your experience.
by Alexander Vaughn
September 16, 2010
In August we told you about a curious "iProd 2" reference found by developers in the iOS 4.1 system files. We've speculated that this might already be a sign of the existence of an iPad 2, as we knew the "iProd 1" was revealed to be the iPad we know today. Well, TUAW managed to find out what the iProd 2 really is, and no, it's not the new iPad.
According to some system files found in the freshly released iOS 4.2 Beta, the iProd 2 is the new Apple TV that's due to arrive in a couple of weeks. This definitely confirms that the Apple TV is indeed running iOS. As TUAW notes, it might be lacking the springboard app (the iPhone homescreen) but since the rest of the system is most likely very similar, it's probably jailbreakable. Why would Apple use iOS in the Apple TV? Well, it's clear that by doing this, Apple is taking advantage of both economies of scope and scale. It allows them to leverage software they already have and which is optimized for hardware they're already producing in huge quantities. Then, of course, there could be a second element to it, which would be leveraging iOS to bring apps to your TV. Yet, the tech world is split on that one. It's definitely feasible, and if Apple doesn't do it, jailbreakers will. As for the iPad 2, don't worry because even if Apple hasn't referred to it in its code yet, it's definitely already somewhere in Cupertino right now, in between the iPhone 5 and the yet-to-be-launched iBrain implants. 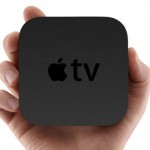 Confirmed: Apple TV Is The iProd 2 & Runs iOS
Nothing found :(
Try something else