You are using an outdated browser. Please upgrade your browser to improve your experience.
by Alexander Vaughn
September 8, 2010
Can you believe that even with the smashing success of Justin Bieber, apps are still growing at a faster rate than music? We don't need to tell you how successful Apple's iTunes music store is. It has been around for quite a while now, and has, without a doubt revolutionized the music industry. As for the App Store, it's not doing too badly either. Yet, as mainstream as apps and the App Store might have become, you probably wouldn't think these would grow to be bigger than something like - let's say - music; which Apple is the largest retailer of. Well, prepare to be shocked, as according to some data put together by Asymco (chart above), the App Store is actually selling much more, and much faster than iTunes. In just over two years, Apple has already sold as many apps as it sold songs in the first five years of its online music retailing business. More importantly, if the trend holds, the total unit sales of apps will surpass the total iTunes music unit sales by the end of the year. According to Asymco, there are over 17.6 million apps sold every single day. All this gives me the strange feeling this old Intel ad might become our new reality in the very near future:

Are app developers the new rock stars? Tell us in the comments! 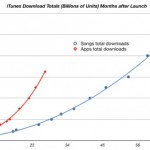