You are using an outdated browser. Please upgrade your browser to improve your experience.
by Alexander Vaughn
September 3, 2010
As a former user of the iPhone 3G running iOS 4.0 (thank goodness I have the iPhone 4 now, it's amazing), I can confirm that the iOS 4.0 software update was a huge catastrophe on the 3G. It was nothing short of an iPhone killer, as the slow performance made me almost give up on my iPhone 3G, until I took the time to downgrade it. Well, actually, I ditched it as soon as I could anyway. Steve promises us that iOS 4.1 will be a different story, and will restore the iPhone 3G's lost youth. Can he keep that promise? That's exactly what the folks over at Lifehacker wanted to figure out today. They ran what they call a " far from a scientific examination of both versions of iOS 4." Basically, they shot an iPhone 3G performing some simple tasks running both the 4.0 and 4.1 versions of iOS and compiled them into a video for us to see the speed difference. As you will see, iOS 4.1 does improve the situation, but only slightly, and only for some applications. If you just can't live without iOS 4.x then this will definitely be welcome. Otherwise, I would still recommend staying with 3.1.3 for the time being (or getting the iPhone 4). Honestly, you'd be doing yourself a favor. Here is their performance showdown, check it out: 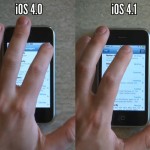