You are using an outdated browser. Please upgrade your browser to improve your experience.
by Bryan M. Wolfe
October 11, 2010
At least one iPhone imitator is giving in to Apple. China-based Meizu Electronic Technology has agreed to discontinue production of its M8 smartphone, which looks very similar to Apple’s iPhone device. In addition, the company will also stop production of its M9 and future models as well. This news came from Meizu CEO, Jack Wong in a posting on his company’s website. The M8 will cease production, according to Wong due to pressure from Apple. The M8, which is pictured here, certainly looks like it could be the iPhone’s sibling. According to Electronista, Apple and Meizu had originally agreed that the Chinese company would no longer make future versions of its mobile phones because of copyright infringement. However, Apple changed its mind and demanded that all models, even those already in stores, be removed from the shelves. Electronista stated:

The American company initially struck a deal with Meizu to stop just production of new models but allegedly turned on the deal and ordered Meizu to stop selling any models that were already in store. China's Intellectual Property Office wasn't legally enforcing the deal but could shut down factories without a warrant if it felt the move necessary.

Meizu has long been accused of copying Apple products, including the iPod, iPod nano and iPhone. Today's development is great news for the Cupertino, California-based company and for everyone that wants to see intellectual property laws upheld in the United States and abroad. 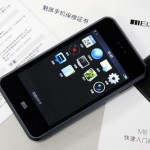 iPhone Knockoff Goes Bye-Bye
Nothing found :(
Try something else