You are using an outdated browser. Please upgrade your browser to improve your experience.
by Joe White
October 12, 2010
I think it's pretty fair to say that the Retina display is great. The quality of Retina display optimized apps on the iPhone 4 and iPod touch 4G devices is astonishing. I remember the first time I held an iPhone 4; the design, I thought, was nice enough, but the thing that really made me gasp was the sheer quality of the Retina display. The only downside to this great feature is that not all apps have yet been Retina optimized. Which is disappointing, to say the least. Most of our favorite apps have received the all important update (Doodle Jump being a big one). Yet, various new releases (such as FIFA 11 and Sonic 4) aren't Retina optimized: something we hope will come soon. However, thanks to iSpazio, we have some good news. If you're sporting a jailbroken iPhone (or iPod touch), and really wish your favorite game was Retina optimized, there is a solution. And, it's called Retinasizer. Retinasizer is a free tweak which is currently available in Cydia. Once installed, Retinasizer will enhance the quality of a variety of iOS games you currently have on your iDevice, upgrading them for the Retina display. As of this moment, Retinasizer only supports a mere nine titles, but the tweak's developers have assured us that a future update will expand Retinasizer support. The games currently supported are: If you have one of the above games, why not check out Retinasizer in Cydia? It is free, after all. And, thanks to the recent release of greenpois0n, jailbreaking your iOS 4.1-running iDevice is now possible! If you decide to take a look at Retinasizer, be sure to let us know how it works for you in the comments below. 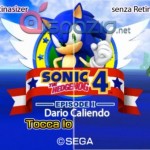 Jailbreak Only: Retinasizer - Enhance The Quality Of Non-Retina Games!
Nothing found :(
Try something else