You are using an outdated browser. Please upgrade your browser to improve your experience.
by Bryan M. Wolfe
October 8, 2010
In spite of Antennagate, Apple has scored a home run with the iPhone 4. Thanks to a free case program (which just expired), that put the antenna controversy behind it, the Cupertino, California-based company has seen its newest phone continue to fly off shelves worldwide. However, according to gdgt, Apple might have a new iPhone 4 woe to contend with, which is only now coming to light. Apparently, the company is concerned about the effect hard shell cases could have on the device. Specifically, we’re talking about the ones that slide on and off that can cause a scratch or two on the device and lead to bigger problems. What is being called “Glassgate” is what happens when these scratches become a crack or fracturing of the entire rear pane of glass. Apple is so concerned about this, that they have actually started blocking the sales of nearly all third-party iPhone 4 cases from its stores. As a result, hardcases are gone completely or will be gone soon from every Apple Store worldwide. According to gdgt:

In the mean time [sic], many third-party manufacturers with slide-on cases are all but dead in the water; accessory companies that invested heavily in developing and shipping these iPhone 4 cases now find themselves waiting indefinitely to get their products back into their top sales channel: the Apple Store. And as you might expect, Apple hasn't exactly been to clear about when -- or even if -- it's going to get back to business as usual selling the full selection of iPhone 4 cases. It should also come as no surprise that Apple representatives declined to comment on this story.

I’m not sure what to make of this story. On the one hand, as a consumer I want to make sure that my iPhone is around and functional at least through the life of its AT&T contract. However, I also understand that even under the best conditions, cell phones begin to deteriorate with regular wear and tear. I’m not sure if this is Apple’s way of getting ahead of a possible problem or finding a way to eliminate competition for its Bumper cases. What do our readers think? Have you experienced cracks or fractures with your iPhone 4? Let us know by using the comments below. 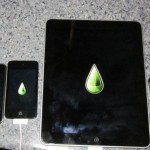 Report: Apple Now Worried About "Glassgate"
Nothing found :(
Try something else