You are using an outdated browser. Please upgrade your browser to improve your experience.
by Joe White
October 12, 2010
Could Apple be preparing an unexpected iOS software update? According to ZDNet, Apple Australia has confirmed that an iOS 4.1.1 update is soon to be released. The news comes following the discovery of a bug which affected Australian iPhone owners. On Sunday morning, daylight saving time hit New South Wales, Victoria, the Australian Capital Territory, South Australia and Tasmania. Since then, any recurring alarms set within those time zones have been inexplicably sounding off an hour ahead of schedule, to the great annoyance of many Australian Apple fans. However, according to Apple Australia, a solution is already in the works:

We're aware of this issue and already developed a fix which will be available to customers in an upcoming software update.

Many have taken this to signal the release of a minor software update (most probably iOS 4.1.1), and are encouraging others to back up their SHSH files as soon as possible. Luckily for jailbroken iPhone owners, backing up SHSH files is quite simple. You can either jump onto Cydia, and hit the "Make My Life Easier" button, or do it yourself using iSpazio's guide (Google Translate). In the meantime, we'll be watching iTunes expectantly, waiting for this anticipated software update to come through. When it does, we'll let you know, so be sure to check back with us! 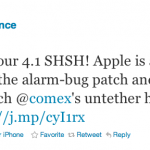