You are using an outdated browser. Please upgrade your browser to improve your experience.
by Alexander Vaughn
October 3, 2010
The prospects for iDroid, the Android for iOS port were incredible. Just like Bootcamp on the Mac, iDroid had us all dreaming about getting the best of both smartphone worlds on our iPhones. Unfortunately, and despite lots of effort, it's still too sluggish to be of any use. A big part of the problem, is that the port only works on first and second generation iPhones at the moment, and they are simply way too slow for that kind of geekery. Yet, we still have some hope because, according to iSpazio this week, iDroid might now be on its way to our more recent devices. Asked about the matter on Twitter, Pod2G, the notable Dev-Team member replied in the affirmative:

Of course, with the new flexible App Store approval guidelines and Frash, this might not make as much sense as it used to. Nevertheless, I think giving people a taste of the dark side without having to get a new device is a great idea. Hoping, of course, that they come back to iOS faster than it takes to find the Android's language setting menu. 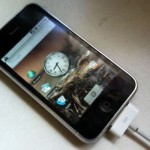 Unconfirmed: Android Now On Its Way To The iPhone 4

Unconfirmed: Android Now On Its Way To The iPhone 4
Nothing found :(
Try something else