You are using an outdated browser. Please upgrade your browser to improve your experience.
by Joe White
November 22, 2010
According to a recent post by Macworld, Apple TV's OS will also be updated today. The new update will apparently bring support for AirPlay and VoiceOver. This is great news for Apple TV owners. AirPlay allows users to stream video from iTunes to any AirPlay compatible device. Apple first announced AirPlay a couple of months ago, at the September special event. Today, Apple is also set to release iOS 4.2, which brings AirPlay to the iPad, iPhone, and iPod touch. VoiceOver is another important feature Apple TV owners will appreciate. VoiceOver allows blind or poorly sighted Mac or iDevice owners to interact with their device. Apple boasts 50+ reasons why VoiceOver is a a "unique solution" for the visually impaired. It's great news that this clever service will very soon support Apple TV. Apple TV's 4.1 software update is set to be released today, and we'll be reporting as soon as it goes live. In the meantime, check out the video (below) of VoiceOver running on an Apple TV device. And, don't forget to let us know your thoughts regarding the update in the comments. 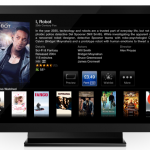 Apple TV 4.1 Update To Be Released Today, Brings Support For AirPlay And VoiceOver

Apple TV 4.1 Update To Be Released Today, Brings Support For AirPlay And VoiceOver
Nothing found :(
Try something else