You are using an outdated browser. Please upgrade your browser to improve your experience.
by Joe White
November 11, 2010
According to a recent survey by Broadbandgenie, British tech-fans think the price of Apple's touchscreen tablet is simply too expensive to buy. While iPad prices start at $499 (£309) in the US, over in the UK, the basic model is priced at £429. Out of the 1,300 people questioned by Broadbandgenie, a massive 60% think the iPad isn't worth more than £400. Over 200 people stated that Apple's tablet certainly isn't worth the price it's selling for. With laptops and e-readers available for less than £400, it's hardly a surprise that many Brits are holding off on buying an iPad, at least for the time being. Chris Marling, the editor of Broadbandgenie, did note:

Over time, the tablet is likely to become a standard gadget in the majority of UK households. Essentially right now they bring nothing new to the party, so are very much a luxury – especially in this price bracket.

As 9to5Mac reports, this really hasn't had any major impact on UK interest in the iPad. Currently, the tablet is ranked as one of the country's most wanted Christmas gifts. However, it seems clear that if Apple wants the UK to really adopt the iPad as a legitimate, useful device, the price needs to drop. Perhaps when iPad 2 hits store shelves, we'll see a reasonable first-gen price drop. And, maybe then, Apple fans in the UK will consider taking the iPad for a spin. In the meantime, let us know if you think the iPad is overpriced in the comments below. 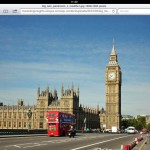 Could Apple's iPad Be Too Expensive For Brits?

Could Apple's iPad Be Too Expensive For Brits?
Nothing found :(
Try something else