You are using an outdated browser. Please upgrade your browser to improve your experience.
by Joe White
November 30, 2010
Steve Jobs has recently confirmed that AirPlay, Apple's video streaming service, will be coming to Safari and third party apps in 2011. Earlier today, one lucky MacRumors reader received a reply from Jobs, following an email which had been sent questioning the future of AirPlay's compatibility. The question:

Hi, I recently updated both my iPhone 4 and iPad to 4.2. I think my favourite feature is airplay. This is seriously amazing and makes sharing content seamless. I just purchased Apple TV and was wondering are you ever going to make airplay video work for videos in safari and 3rd party apps? I hope to get a response. :) [sic]

To which Steve Jobs replied:

Yep, hope to add these features to Airplay in 2011.

Interesting, right? Further AirPlay compatibility would undoubtedly be much appreciated by iDevice owners. MacRumors also picked up on another AirPlay fact, which was originally noted by John Gruber, of Daring Fireball. He wrote:

The most obvious shortcoming: You can't use AirPlay to play videos shot on your iPhone. That's an obvious feature, right? Shoot a video on your iPhone, then play it back for family and friends on your big TV via AirPlay. No syncing, no docking, no moving files around. Just hit play. But it doesn't work in iOS 4.2.1 - even though you can use AirPlay to show still photos from the Photos app.

While some believe this is due to bandwidth issues, MacRumors also notes that footage shot on the iPhone 4 and synced to iTunes can then be streamed via AirPlay:

Gruber theorizes that Apple had to roll out incomplete AirPlay functionality in order to meet its goal of releasing iOS 4.2 by the end of November and that we will see increased functionality coming in the future, as Jobs' purported email suggests.

We'll keep you posted on the future of AirPlay when more news becomes available. In the meantime, be sure to let us know how you're using AirPlay in the comments below. 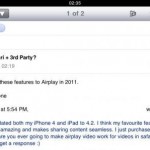 Steve Jobs: AirPlay Coming To Safari And Third Party Apps In 2011
Nothing found :(
Try something else