You are using an outdated browser. Please upgrade your browser to improve your experience.
by Bryan M. Wolfe
December 7, 2010
This isn’t just another "Verizon iPhone" story. As of now, we still don’t know when or if Apple will allow the largest U.S. wireless carrier to offer its top selling handset. The rumor mill on this subject has been quiet for some time, which is nice for many of us long tired by the speculation. However, we must still report a little rumor about a possible Verizon-Apple deal, which may or may not be true. According to Kaufman Bros.’ Shaw Wu, and reported in Fortune magazine, Verizon will only carry the iPhone in the U.S. if T-Mobile and Sprint do not. Wu states:

"We are hearing that VZ does not want iPhone, the hottest selling smart phone, available on T-Mobile USA and/or Sprint and may be willing to pay for exclusivity to itself and AT&T."

If Verizon is willing to pay to share the iPhone with AT&T exclusively, more power to Apple, as they will be rewarded handsomely by such a deal. However, I am a strong believer that more vendors are better for consumers. Plus, more iPhone users will lead to better apps for everyone since the marketplace will be larger. Which is better? The iPhone at AT&T and Verizon? Or, at AT&T and T-Mobile, and Sprint? Should Apple agree to such a deal, or tell Verizon it wants T-Mobile USA and/or Sprint to come along too? Leave your comments below. 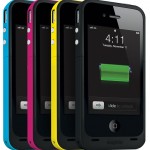 Will Apple Shutout T-Mobile, Sprint To Bring iPhone To Verizon?

Will Apple Shutout T-Mobile, Sprint To Bring iPhone To Verizon?
Nothing found :(
Try something else