You are using an outdated browser. Please upgrade your browser to improve your experience.
by Bryan M. Wolfe
December 8, 2010
The next generation iPad is expected to include a combination of LCD displays (built by LG and Chimei Innolux) and BLUs (back light units). This news comes from Digitimes, which says Coretronic will become Apple’s BLU supplier. What this means is the new iPad will not include an AMOLED display, which doesn’t require back lighting. There is still no word on whether the iPad 2 will include a Retina display. A next generation iPad has not been officially announced by Apple. However, the device is widely expected to debut sometime in early 2011. 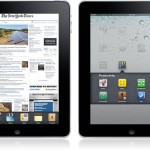 iPad 2 Will Include Back Light Units, LCD Displays

iPad 2 Will Include Back Light Units, LCD Displays
Nothing found :(
Try something else