You are using an outdated browser. Please upgrade your browser to improve your experience.
by Joe White
February 20, 2011
AT&T has reportedly provisioned the Personal Hotspot feature for a developer running iOS 4.3 beta 3. The feature allows iOS users to turn their iPhone into a personal Wi-Fi hotspot, and is currently available to Verizon iPhone owners. The Verizon iPhone ships with iOS 4.2.6 pre-loaded. This version of the iOS already features Personal Hotspot. Unfortunately, the rest of us have to wait for iOS 4.3 until we can take advantage of the feature - and even then, it may not be possible to utilize. This is because each carrier can choose whether they want to support the feature or not. Many expect AT&T to support Personal Hotspot, because the carrier currently faces direct competition from Verizon. And, according to one iOS developer, AT&T has already provisioned the feature on his iPhone, after he "mentioned Verizon a few times." For Verizon iPhone owners, the feature costs an additional $20 per month. This gives users 2GB of data. However, if you go over this limit, every subsequent gigabyte downloaded will cost an additional $20. AT&T has not yet officially confirmed whether it will support Personal Hotspot. However, many are expecting the carrier to support the feature, and to match Verizon's Personal Hotspot price plans. [via Apple Insider] 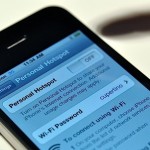 AT&T Provisions Personal Hotspot In iOS 4.3 Beta 3?
Nothing found :(
Try something else