You are using an outdated browser. Please upgrade your browser to improve your experience.
by Bryan M. Wolfe
February 28, 2011
Somewhere in the world, the final original iPad produced is waiting for its new owner to claim it. Two days before the official announcement of the iPad 2, Apple looks to have ended production of the original. Because of this, supplies of the first generation device are becoming scarce at retail outlets around the world. According to 9 To 5 Mac, some retailers are reporting all of their iPad supplies are gone or will be today or tomorrow. Apple is announcing the iPad 2 on Wednesday so this news isn’t surprising.  What is interesting is how quickly the current stock of iPads is being depleted. Since empty shelves make retailers unhappy, and do nothing for Apple’s bottom line, the news seems to confirm our earlier report that the iPad 2 will be released soon after Apple’s announcement. Could a mid-March release be in the offing? 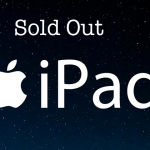 Original iPads Becoming Scarce As Production Of First Generation Device Seems To Have Ended
Nothing found :(
Try something else