You are using an outdated browser. Please upgrade your browser to improve your experience.
by Joe White
March 17, 2011
New York's famous Fifth Avenue Apple Store is currently the target of a group of "scalpers" - people who are buying up iPad 2 units, and reselling them for double the original price. Since the iPad 2's launch last week, many genuine Apple fans have been unable to get a second generation iPad from the store, because these scalpers are buying them all up. As you can see in the above image, members of the group have bags full to the brim with new iPad 2 models. The New York Post reports that recently, around 200 people were queuing "outside the store and around the corner" on behalf of the gang. One Apple Store employee told the newspaper:

"Listen, we all know what's going on here. I find it sad and disgusting," the worker said. "These people are preventing ordinary folks from getting their hands on an iPad."

For example, one Apple fan has visited the store three times since the iPad 2 models went on sale - however, she has been unable to buy one because there are none available. After explaining the situation, an Apple Store manager told her: "There's nothing we can do." Once purchased, the iPad 2 models are being resold within North America - and to countries outside of America, too. One of the rogues told the New York Post: "The ones we bought today are already on their way to China. It's been pretty crazy." Apple would be able to reduce this kind of activity by releasing new iPads everywhere, on the same date. Over here in the UK, we're not due to get the iPad 2 until March 25 - and there's a good chance Apple will postpone this date, due to shortages in North America (it happened last year). At the moment, we'd advise you to avoid the Fifth Avenue Apple Store if you're looking to buy an iPad 2. And, if you've had a bad experience at this store in the last week, let us know in the comments. 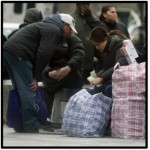 Apple Store Manager: "There's Nothing We Can Do" About Black Market Extortionists

Apple Store Manager: "There's Nothing We Can Do" About Black Market Extortionists
Nothing found :(
Try something else