You are using an outdated browser. Please upgrade your browser to improve your experience.
by Joe White
March 3, 2011
Great news, Apple fans: Best Buy, Sam's Club, and Walmart will sell the iPad 2 from day one. The second generation device, which was announced yesterday by Steve Jobs, is scheduled to launch in the U.S. on Friday, March 11. As you can see in the above image, the iPad 2 is now showing on Best Buy's website. Furthermore, according to a 9to5Mac tipster, Sam's Club and Walmart will also sell the device from March 11. Additionally, we're expecting AT&T and Verizon stores to offer the iPad 2. If they do, customers will have a wide variety of iPad 2 sellers to choose from, which would be great. The second generation iPad starts at $499.00, and will be available for the same price the first generation iPad currently retails at. Are you planning on grabbing an iPad 2 come March 11? Let us know in the comments. 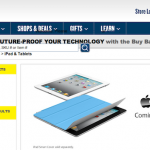 Best Buy, Sam's Club, Walmart To Sell iPad 2 At Launch
Nothing found :(
Try something else