You are using an outdated browser. Please upgrade your browser to improve your experience.
by Bryan M. Wolfe
March 21, 2011
The iPad 2 launch has been riddled with long lines, angry customers, and inventory nowhere close to demand. Bad news for Apple? Yes and no, and here's why. The next generation iPad went on sale 10 days ago, and its rollout has been anything but smooth. For the lucky “few” that actually bought the tablet (unofficially, we’ve been told between 500,000 and one million iPad 2 units were sold during the first weekend), there are smiles and mostly good reviews. For those that still didn’t get their hands on the iDevice, total frustration. From Apple’s perspective, the launch has been a success. The inventory that is available is sold-out in seconds and each morning brings further stories about long lines and angry customers. We’ve been here before, not only with the original iPad in 2010, but with each iPhone launch. The pattern is this: Rumors of a product refresh leads to Apple holding a “media event.” The new product, proudly held by Steve Jobs, is discussed worldwide, leaving would-be buyers giddy with anticipation. Then the product is launched with demand far outpacing supply. While I understand people’s frustrations, this is simply part of the game. When I was lucky enough to purchase my white iPad 2 on launch day, the entire experience felt like Christmas morning. I would suspect others are having similar feelings, even if that moment arrives later than expected. What can be done? I honestly don’t believe Apple intentionally wants to make people unhappy. In fact, in their perfect world, they’d probably like to see the lines but make sure each of those would-be buyers went home happy, not sad. However, short of stockpiling millions of units prior to launch day, the reality is this just isn’t possible. Apple sets a launch date and then carries through with it, regardless of how many units are actually available that day. What Apple can do however, is make it more likely would-be customers can make a purchase on launch day, and help them better manage their expectations. First, they should limit purchases to one item per customer, at least until inventory levels catch up to demand. Currently, the Cupertino, California-based company allows two units per customer. Cutting this down to one would probably cut down on the number of buyers hoping to make a quick buck, and allow others to make a purchase. Apple could go further still by limiting sales to one unit per credit card. Finally, Apple should do a better job alerting customers of current iPad inventories. This could be done using a website and would probably eliminate some frustration. As it stands now, even representatives at the local Apple Store cannot provide this information. Long lines and angry customers are two different things. If Apple eliminates the latter, the process will go smoother and they will still get the media coverage they so crave. While "angry" customer may still give them business, this might not happen in the long term as more competitors join the growing tablet market. What do you think? Leave your comments below. 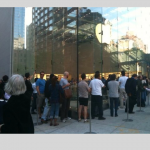 The iPad 2 Launch: The Long Lines Aren't The Problem For Apple, It's The Angry Customers

The iPad 2 Launch: The Long Lines Aren't The Problem For Apple, It's The Angry Customers
Nothing found :(
Try something else