You are using an outdated browser. Please upgrade your browser to improve your experience.
by Bryan M. Wolfe
March 21, 2011
Best Buy stores in Canada may begin selling the iPad 2 in the country beginning at 10 a.m. local time this Friday, March 25. This news was collected from an internal Best Buy ticket system, which was first leaked by 9 To 5 Mac. While Apple had previously announced Canada would be getting the second-generation iPad this Friday (along with other countries), this is the first time we’ve heard of an actual time for the release. According to the message:

Was confirmed by my store manager. We will be selling them at 10am Friday when we open. It’s first come first serve and there WILL be a line up. If we are doing the same thing as last year we will be handing out a piece of paper which you will fill out telling us which ipad you want, size, color ect.. (sic)

However, be warned: Sales might not actually start until 5 p.m. local time, as was the case with the U.S. launch. The message continues:

If it’s anything like the US release date we will not be able to sell them until 5PM EST. I would wait until ~24th for more information on price and availability.

The iPad 2, which has experienced shipping delays in the U.S., will be available in the following countries beginning this Friday: Australia, Austria, Belgium, Britain, Canada, the Czech Republic, Denmark, Finland, France, Germany, Greece, Hungary, Iceland, Ireland, Italy, Luxembourg, Mexico, Netherlands, New Zealand, Norway, Poland, Portugal, Spain, Sweden, and Switzerland. Okay, Canadian readers: Are you going to stand in line to get your iPad 2 on Friday? Let us know by using the comments below. 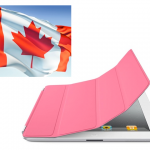 The iPad 2 In Canada: Will Sales Begin This Friday At 10 AM Local Time?

The iPad 2 In Canada: Will Sales Begin This Friday At 10 AM Local Time?
Nothing found :(
Try something else