You are using an outdated browser. Please upgrade your browser to improve your experience.
by Bryan M. Wolfe
March 21, 2011
AT&T is acquiring T-Mobile, but that doesn’t mean it will begin selling the iPhone anytime soon. This information was made clear on T-Mobile’s new FAQ page about the pending acquisition. Still, don’t be surprised if the Apple handset does arrive at T-Mobile someday, but not in the way you might expect. According to T-Mobile, the AT&T acquisition won’t be completed for 12 months, and for now they remain a separate company. Because of this, they state firmly: “we do not offer the iPhone.” To get this point across, the same FAQ suggests T-Mobile customers look at buying the Samsung S 4G or new Sidekick 4G. With the iPhone 5 expected in June, T-Mobile customers who want to purchase the new handset face a dilemma: “switch” to AT&T or remain with the soon-to-be merged T-Mobile. Our advice to T-Mobile customers is this: If your contract is up and you want an iPhone, move to AT&T. Otherwise remain with T-Mobile. Besides, AT&T will probably offer a special deal for T-Mobile customers to remain in the fold and not escape to Verizon, or to another carrier. In all likelihood, once the acquisition is complete, the T-Mobile name will be history, as past experience tells us. In 2001, Cingular became the largest U.S. mobile phone company. It was a joint venture between AT&T and BellSouth (formerly know as SBC Communications). In 2005, SBC gobbled up the entire company. Within months, Cingular became AT&T. Therefore, once T-Mobile is rechristened AT&T, there will be plenty of iPhones to go around. The $39 billion AT&T/T-Mobile acquisition will make AT&T the largest U.S. carrier, with a combined 129 million subscribers. That title currently belongs to Verizon, which has 94.1 million users. If you are a T-Mobile customer, we'd like to hear from you. Are you planning on "switching" to AT&T now or waiting until the sale is complete? Leave your comments below. 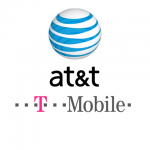 T-Mobile: No iPhone Here. But Just Wait
Nothing found :(
Try something else