You are using an outdated browser. Please upgrade your browser to improve your experience.
by Bryan M. Wolfe
March 9, 2011
Despite claiming its users actually wanted it, Twitter has quietly stopped its Quick Bar from intrusively popping up over the timeline using its universal app. Now, the Bar simply sits at the top of screen. Released with the app’s most previous update, the Quick Bar shows Twitter trending topics. Unfortunately, it did this while blocking the timeline, causing customers to complain. Thing were made worse given that you could not delete the feature or at least disable the pop-over. Thanks to version 3.3.1, the problem is no more. According to the app’s iTunes page, the update changes the Quick Bar's “default behavior to not overlap tween in timeline.” Unfortunately, deleting the Quick Bar is still not possible. The universal Twitter app is available now in the App Store. 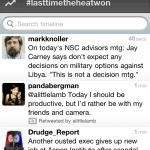 Twitter Backtracks And Deletes Quick Bar Pop-Over
Nothing found :(
Try something else