You are using an outdated browser. Please upgrade your browser to improve your experience.
by Bryan M. Wolfe
March 29, 2011
Still trying to gather enough money to attend this year’s WWDC event in June? Don’t bother, since the event is already sold out, ten hours after tickets went on sale. With prices starting at $1599, Apple had no problem selling each ticket to its highly anticipated event, which is being held June 6-10, in San Francisco, California. At this year's event, Apple will focus on “the future of iOS and Mac OS.” On the first day of the event, Apple is expected to demo iOS 5 and OS X Lion. However, for the first time since 2007, a new iPhone is not expected to be announced at WWDC, since this year's event will focus on software, not hardware. As a quick recap, according to Apple, WWDC ’11 will include: Did you get a ticket to WWDC? Let us know by using the comments below. 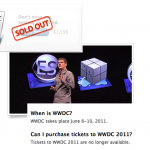 WWDC '11: Sold Out In Ten Hours
Nothing found :(
Try something else