You are using an outdated browser. Please upgrade your browser to improve your experience.
by Bryan M. Wolfe
March 9, 2011
Production of the long-delayed white iPhone 4 has now started, according to Apple Insider. The handset should be available for shipment sometime in early April. But is this news something to be excited about? The handset, which was supposed to arrive in June 2010 along with the black iPhone 4 model, has been plagued by numerous delays brought on by color problems. Using previous painting methods, Apple's attempts to manufacture the white iPhone 4 apparently resulted in a large number of defective handsets. These problems have now been corrected. According to Concord Securities Analyst Ming-Chi Kuo, speaking to Apple Insider:

Apple has made changes (to the) the "film material to solve the full-lamination problem that [was] the reason why white iPhones [were] delayed.”

Friday’s release of a white iPad 2 is further confirmation that Apple is now happy with the manufacturing process. So two months before the expected release of the iPhone 5, the white iPhone 4 will soon become a reality. The white iPhone will be of the GSM variety only. Therefore, don’t expect a CDMA version. In the United States, this means if you really want this, you will have to purchase it at AT&T. Are you (still) interested in buying a white iPhone 4? Leave your comments below. 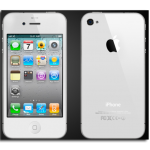 Try Not To Yawn: White iPhone 4 Could Arrive In April

Try Not To Yawn: White iPhone 4 Could Arrive In April
Nothing found :(
Try something else