You are using an outdated browser. Please upgrade your browser to improve your experience.
by Bryan M. Wolfe
April 28, 2011
In news first reported by China’s sznews.com, three Taiwan-based Foxconn employees have been arrested for selling iPad 2 trade secrets. Apparently many of the pre-released iPad 2 accessories were specifically developed using information from these individuals. Foxconn assembles several Apple products, including the iPhone/iPod touch and iPad. According to the sznews.com report, as translated by DigiTimes:

Several online shopping retailers in China were able to sell iPad 2's protective case products before the iPad 2 was even launched, leading Foxconn to suspect that there might have been some employees leaking the design of iPad 2 which it reported to the local police.

The three employees were arrested on December 26, 2010 and officially charged on March 23. Naturally, Apple product rumors are a day-to-day occurrence. Many of these rumors come from the suppliers themselves. In this case, it lead to arrests. What do you think? Leave your comments below. 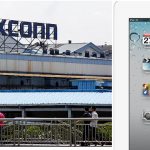 Some iPad 2 Leaks & Rumors Lead To Jail For Three

Some iPad 2 Leaks & Rumors Lead To Jail For Three
Nothing found :(
Try something else