You are using an outdated browser. Please upgrade your browser to improve your experience.
by Bryan M. Wolfe
April 20, 2011
A revised “Search iPhone” dialog box and improved multitasking menu aren’t the only things coming with iOS 5.0. We could also get full Facebook integration with contact syncing, in news first uncovered by BGR. Earlier today, we highlighted two videos allegedly showing the next generation iOS, which were released by Vietnam-based Tinhte. The demo, which surprisingly is that of a white iPhone 4, includes a new “Search iPhone” dialog box at the very top. This replaces the left swipe functionality of the current iOS. Also included is a change in how iOS handles the multitasking menu. Instead of showing open programs with app icons, iOS 5 represents them with a visual of each app’s open menu. However, BRG spotted something else: there is no longer a Facebook app. Rather, the social networking service is now fully integrated into the iOS. This isn’t the first time Facebook integration has been rumored. As far back as April 2010, it was reported Apple was bringing this feature to a future iOS version. Unfortunately, when iOS 4.0 was released in June of last year, it wasn’t included. Could it be that Apple will finally offer Facebook integration with iOS 5? Take a look at the video: Meanwhile, The Next Web believes these videos are fakes, so who knows? Until Apple actually unveils iOS 5.0, we'll continue playing the rumor game. What do you think? Leave your comments below. 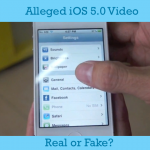 The iOS 5.0 Debate: Facebook Integration Could Be Coming Too

The iOS 5.0 Debate: Facebook Integration Could Be Coming Too
Nothing found :(
Try something else