You are using an outdated browser. Please upgrade your browser to improve your experience.
by Bryan M. Wolfe
April 26, 2011
Sony has joined the tablet market. The venerable company launched its first two Android-enabled tablet computers at an event today in Tokyo, in news first reported by Reuters. The tablets, called S1 and S2, are Wi-Fi and 3G/4G compatible and run Google’s Android 3.0 OS. The first includes a 9.4-inch display, while the second has two 5.5-inch displays. Most significantly, both will allow the use of PlayStation games. According to Lee Sun-tae, an analyst at Meritz Securities in Seoul:

"Although it's a late comer in the market, it has potential as what you need is just one big uniqueness that can sell to customers be it design or whatever. By the same token it can be just one of another Android phones flooding the market amid intensifying competition."

The electronics giant, who until today had no tablet device, arrives to the game at a time of massive growth in the industry. In addition to Apple’s iPad 2, Samsung has released its Galaxy Tab, while Barnes & Noble recently updated its Nook Color e-reader to make it more tablet-like. New tablets by Motorola, LG Electronics and HTC are also entering the market. Whether Sony will be able to compete is anyone’s guess. However, the addition of PlayStation compatibility on both the S1 and S2 is appealing. Although prices and street dates for each model have yet to be announced, Engadget believes the S1 will retail for $599, with the S2 priced at $699. Both could arrive in September. What do you think? Leave your comments below. 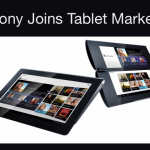