You are using an outdated browser. Please upgrade your browser to improve your experience.
by Bryan M. Wolfe
April 26, 2011
For a while now, Android-based smart phones have been outselling the iPhone. Now, for the first time, they are the most desired handset as well, according to a new Nielsen Co. survey. Nielsen, which tracks smartphone usage on a monthly basis, reports a gradual decline in the number of customers wanting to purchase an iPhone. In July –September 2010, Apple’s handset was coveted by 33 percent of the public. During January – March 2011, that number dropped to 30 percent. Meanwhile, Android’s numbers have increased. In the mid-2010 survey, 26 percent of respondents indicated their next phone would be Android-based. Through March, that number increased to 31 percent. Support for BlackBerry devices dropped from 13 to 11 percent over the same time period. According to Nielsen, changing smart phone preferences are transferring to sales figures. Through March 2011, half of those who indicated they purchased a phone in the past six months said they chose an Android device. The iPhone’s share was 25 percent. In our opinion, what is most surprising about these numbers is how the availability of the Verizon iPhone did nothing to slow Android’s momentum. When AT&T was the only U.S. iPhone carrier, one could make the excuse that Android was catching up because of availability issues. However, that is no longer the case. Most likely, two factors account for the shift towards Android. First, while there is only two iPhones (the 3GS and 4), numerous Android-based smart phones are available in the market. Second, while new Android-based smart phones come to the market each month, the iPhone 4 is nearly one-year old, while the iPhone 3GS is nearly two-years old. Most consumers that wanted an iPhone have already purchased one, and new buyers are likely waiting for the iPhone 5’s arrival later this year. Still, as the number of Android-based phones continues to grow, their overall percentage of the smartphone market as a whole will continue to grow as well. How this translates in the growing tablet market remains to be seen. Will Android-based tablets dominate the market in the future? Time will tell. What do you think? Leave your comments below. 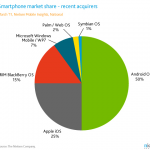 For First Time, Android Smart Phones Most Preferred
Nothing found :(
Try something else