You are using an outdated browser. Please upgrade your browser to improve your experience.
by Bryan M. Wolfe
May 11, 2011
The 64GB 3G iPad 2 is the most popular version of Apple’s best selling tablet in western Europe, according to a new report from Content (via V3). The second most popular is the 16GB Wi-Fi only model. This means the most and least expensive models are the top sellers. The market research firm found the 64GB 3G model accounted for one third of all iPad 2 sales. The 16GB Wi-Fi only followed with 22 percent. There are a number of reasons these two models are most popular, in our opinion. For one, consumers have seen one iPad life cycle come and go. Not only do they now know what kind of storage capacity is best for them, but they also know the iPad keeps much of its value for resale. A more likely reason could be Apple overstocked these two models across western Europe, at least at the time the product initially launched. In total, the iPad/iPad 2 accounted for 80 percent of all tablet sales in the first quarter of 2011. However, Apple’s share is actually down five points since the fourth quarter of 2010. According to Salman Chaudhry, mobile computing analyst at Context, this has to do with the growing availability of Android-based tablets. Chaudhry states:

"Apple defined the tablet market with the launch of the iPad in May 2010, but the signs are that the hegemonic presence in the market will face a strong challenge this year. With a number of new Android tablets released by Acer, Asus, Motorola and Samsung, coupled with HP's TouchPad and RIM's Playbook, we can expect Apple's competitors to strongly stake their claim on the market.”

The Context survey didn't mention the share percentage of other iPad 2 models, nor whether consumers preferred a black or white model. What do you think? Leave your comments below. 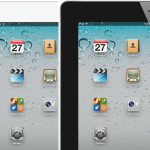 The Top Selling iPad 2 Is...
Nothing found :(
Try something else