You are using an outdated browser. Please upgrade your browser to improve your experience.
by A.T. Faust III
June 6, 2011
With over 200 million iDevices in the wild, Apple has dealt over 14 billion iOS apps to customers worldwide. With knowledge gleaned since the first iPhone launched in 2007, Apple has repeatedly revamped their mobile operating system. Today marks the announcement of the fifth such reiteration: iOS 5. For developers, the new SDK includes some 1500 new APIs, while consumers can expect to harness the power of more than 200 new system features. The biggest features were unveiled today, and -- while a few weren't wholly expected -- most of them were fairly well anticipated in the days and weeks leading up to Apple's keynote.

First and foremost, of course, is the new notification system. After pushing 100 billion infamous blue pop-ups, the Cupertino company has redesigned its approach from the ground up. While the original scheme was effective, iOS Software VP Scott Forstall says, "There were problems too. Like it would interrupt games, or show on your lockscreen but didn't stay." To that end, a new banner now slides down from the top of the screen when a live notification comes through, allowing you to either go directly to the requisite app or dismiss it altogether. Additionally, a single app houses all your notifications for easy perusal at any time. As Scott says:

It's a single place combining all your notifications. Just swipe your finger from the down up to reveal the notification center. It does calls, Facebook updates, everything you want. And it even shows the weather at the top. Notifications are no longer interrupting.

For most users, this is easily the biggest deal of the day regarding the new iOS. However, there are several more noteworthy additions tossed into the mix.

For social media addicts, iOS 5 includes deep Twitter integration at the root level. There is a single sign-on for functionality system-wide, and Scott claims it makes things quite a bit easier:

So you go to settings app, and you can just enter your credentials and all your apps will already be logged into your twitter. We added twitter to many of our apps. Like Cameras, photos. There is a new option to share: Tweet and it opens a nice sheet. YOu can get a countdown and even optionally add your location. It's that simple. In addition, you can tweet articles from safari, websites, vIdeos from youtube, and even apps.

Mobile Safari has also received several upgrades. Most importantly, the program now allows for tabbed browsing. There's also a formatting feature called Reader that extracts a site's or article's text and presents it in a refined, scrollable, single-page manner. Also on hand is Reading List, which allows you to save a story, sync it across your iDevices and computers, and look it over at your later convenience. Moving on, the Reminder app is a simple addition, and it seems to be a GPS system that ties alerts to geographical locations. Another big upgrade is coming to the in-built iOS Camera app. Now, you can shoot photos and videos directly from the lock screen and engage recording with the volume-up button. Pinch to zoom, red-eye reduction, and rotation controls are included, as are auto-exposure and auto-focus locks.

Mail is also getting an overhaul. Scott tells us,

Mail is one of the most used applications on iOS. We're making it even better. Rich text formating, bold, underline. You can control indentation. Drag the address across fields. Also: search the entire content of your message on your phone and the server. It's really nice to use this. You can swipe and so on. Also, we added more support for enterprise customers. This time we're adding X-Mime. You can use certificates, and get that locked icon that says your mail is encrypted.

One of my favorite -- and totally unexpected -- enhancements to the platform is universal dictionary support available to every app in iOS. This is sure to add even more research and writing utility to the iPhone and iPad, and that's a pretty amazing thing! Speaking of "writing," the iPad is receiving a new keyboard option. Though it doesn't add a new row of keys or command shortcuts, the new input overlay splits the keyboard and shrinks button size, moving with your thumbs up and down the screen to fit your particular style and orientation. This newfound freedom makes a nice segue into Apple's "PC Free" approach to iDevice activation. You no longer need to plug your new toy into a Mac or PC for tethered iTunes activation. After all, Scott explains,

We're in a post-pc world. I want to buy an iPad as my own device. I don't have a computer. It's my home device. We know there are many places where households have no computers.

In line with that logic, system updates can now be performed over the air. Turning towards gaming, and with the recognition that iOS is the most popular "gaming console" in the world, it was only natural for Apple to refine Game Center, giving gamers a "more fun and social" platform where they can battle it out for achievement points and compare stats with and recommend new friends. (Curiously, new games can even be downloaded from Game Center, though it isn't yet clear if the app is going to replace the App Store for the entire category). iMessage lets you keep in touch with your non-gaming iOS buddies, and it seems to be an aggregator of various high-quality media sent to and from other iDevice users. It is a messenger service, but we don't know if it will feature any third party instant message integration. It remains to be seen whether iMessage will act like a (much-needed) mobile iChat. Multitasking gestures, Airplay iPad mirroring, and -- finally! -- Wi-Fi sync to iTunes are all in store for iOS 5, too. Developers will get access to the OS today, while the rest of us will be upgraded for free come fall. Update: According to the developer seed, iOS 5 will work on the 3rd- and 4th-gen iPod touch, iPhone 3GS, iPhone 4, iPad, and iPad 2. 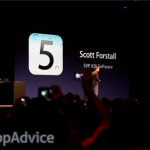 All You Need To Know About iOS 5's WWDC Preview

All You Need To Know About iOS 5's WWDC Preview
Nothing found :(
Try something else