You are using an outdated browser. Please upgrade your browser to improve your experience.
by Bryan M. Wolfe
June 22, 2011
In a striking, but perhaps temporary blow, a U.S. Circuit Court judge has denied Samsung’s request to see Apple’s unannounced future iPhone and iPad models calling the request overreaching. The 11-page order came from Judge Lucy Koh late Tuesday, according to Apple Insider. Currently embroiled in an intellectual property dispute, Samsung and Apple have in recent weeks tried to outdo the other by filing various court requests. On April 15, Apple claimed in the Northern District of California Court, Samsung violated the company’s intellectual property. It specifically targeted the company’s “Galaxy S 4G,” “Epic 4G,” and “Nexus S” smart phones, and its “Galaxy Tab” tablet. In mid-May Samsung was ordered to hand over several unreleased cell phones and tablets to Apple. This was followed by Samsung’s own request for Apple to hand offer designs of the rumored iPhone 5 and iPad 3. This week’s ruling, while seen as a victory for Apple, might not be a permanent one. According to Koh, Samsung had not shown “good cause” to justify an expedited discovery of Apple’s future products. She stated:

"If Samsung had requested reasonable discovery along the lines discussed at the hearing on Apple's motion for expedited discovery, the Court would have granted the request. However, as Samsung has not requested such discovery in this motion, the Court cannot order it. In any case, it appears that Apple may be willing to provide such discovery without the need for Court intervention."

Apple and Samsung have had a long and successful relationship up until this point. Whether this lawsuit will change this relationship is anyone’s guess. Ultimately, the courts will need to determine if Samsung copied Apple’s designs. If they did, a remedy will be necessary. In the meantime, we should probably expect to hear a lot more of the public back and forth between the two companies. 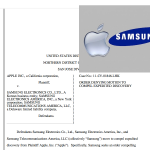 Judge: Samsung Can't See Apple's Future iDevice Designs, At Least Not Yet
Nothing found :(
Try something else