You are using an outdated browser. Please upgrade your browser to improve your experience.
by Bryan M. Wolfe
June 30, 2011
The App Store could be without one of its most popular residents as soon as tonight. Amazon’s Kindle app could soon go away thanks to Apple’s new rules for in-app payment and subscriptions links, according to CNNMoney. Apple’s new rules, announced earlier this year, require merchants to either use Apple’s payment system, or include no mechanism at all for subscriptions and other purchases. This is an especially bitter pill to swallow for companies such as Amazon, who rely on its customers to frequently buy e-books. Were Amazon be forced to remove the links, the Kindle app would become quite a bit more “user-unfriendly.” Conversely, Amazon would suddenly begin losing 30 percent of each e-book sale, were it to begin using Apple’s payment system. That is the amount per transaction Apple collects in the App Store. So far neither Amazon nor Apple has spoken out publicly about the situation, even as the hours tick by. Assuming Apple sticks to its guns, the Kindle app will begin disappearing very soon from the App Store. Personally, I am hoping both sides can resolve this very soon. What are your thoughts? Leave your comments below. 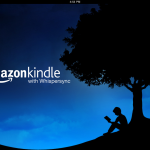 Kindle App Could Be Gone From App Store As Early As Tonight
Nothing found :(
Try something else