You are using an outdated browser. Please upgrade your browser to improve your experience.
by Bryan M. Wolfe
June 28, 2011
Just eight percent of U.S. adults currently own a tablet computer, according to the results of a new Pew Internet Project Survey. Surprisingly, this number hasn’t changed much since November 2010 when that number was five percent. Strangely, while still moving upward, tablet growth has actually slowed in the last few months. For example, in January 2011, seven percent reported owning a tablet such as an iPad. According to Pew, prior to that, “tablet ownership had been climbing relatively quickly.” Meanwhile, the use of e-book readers such as the Kindle and Nook has take off much more quickly. While just six percent of respondents in November 2010 admitted owning an e-book, that number increased to 12 percent in May 2011. This is the first time since Pew began measuring e-reader use in April 2009 that the number users entered double-digits. Regardless, both e-reader and tablet usage lags behind that of other devices such as cell phones and MP3 players like the iPod. In May 2011, for example, 83 percent of adults owned a cell phone, while 44 percent owned a music device. Do these numbers suggest the tablet market is in the wane? Probably not. If anything, they suggest the market is still quite new and the number of devices available remains small. In other words, despite the iPad’s current dominance in the market, there is room for others to make their mark too or even surpass Apple's iDevice. Thoughts? Note: These findings come from a survey conducted from April 26-May 22 among 2,277 adults ages 18 and over, including surveys in English and Spanish and on landline and cell phones. The margin of error for the sample is plus or minus 2 percentage points. [Photo: Digital Trends] 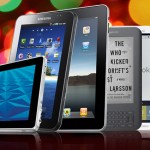 New Survey Suggests Tablets Have Long Way To Go Before Entering Mainstream
Nothing found :(
Try something else