You are using an outdated browser. Please upgrade your browser to improve your experience.
by Bryan M. Wolfe
June 17, 2011
The Swedish-based Spotify music service is swimming in more cash, ahead of its planned launch in the U.S. The company has finalized a huge funding round that now gives it a valuation of $1 billion, according to All Things Digital. Spotify’s latest round of funding, which took six months to complete, ended when the company received $100 million from DST, Kleiner Perkins and Accel. All this will help the company as it prepares to launch in the U.S. sometime this summer. As we told you earlier this month, Spotify has already secured licensing agreements with three of the four U.S. music labels. Only Warner Music Group has yet to sign a deal. However, that is expected soon. Available in Finland, France, Netherlands, Norway, Spain, Sweden, and the UK, Spotify offers a “freemium” music service as well as subscription packages starting at $10 per month. With both, users are able to stream music to their computers and phones. The same options would be available for Americans as well. While Spotify is Europe’s only streaming music service of its kind, the same cannot be said in the U.S. In addition to Apple’s recently introduced iCloud service, Amazon and Google have also released pushed streaming services here in recent months. Therefore, Spotify’s success in the States is not guaranteed. While Spotify’s valuation is $1 billion, it is small by comparison. According to All Things Digital, Pandora, which went public this week, is now valued at $2.1 billion. And Warner, which was just sold, is worth $3.3 billion. Still, Spotify’s entry into the U.S. will be huge; how huge will depend on how many U.S. dollars are spent by consumers for the service. What do you think? Will Spotify’s entry in the U.S. be a game changer? Let us know by using your comments below. 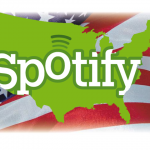 Spotify USA Backed By More Cash
Nothing found :(
Try something else