You are using an outdated browser. Please upgrade your browser to improve your experience.
by Joe White
July 20, 2011
The Apple Online Store is currently down, suggesting that Apple is refreshing the website ahead of the launch of OS X Lion. Furthermore, rumors surrounding new MacBook Air models and LED Cinema Displays could mean we may see new hardware, once the store goes live again. However, the main thing we're excited about is the launch of OS X Lion: A desktop operating system that has been greatly influenced by the iOS, Apple's mobile operating system that's present on the iPhone, iPad and iPod touch. Features of Lion that have come from the iOS include Launchpad, full-screen apps, and of course, the Mac App Store. Apple's upcoming desktop operating system will launch (today) as a Mac App Store exclusive, and will be priced at $29.99. Regarding hardware, a series of rumors have suggested that Apple will launch new products today, too, including a refreshed line of MacBook Air models, Thunderbolt-equipped LED Cinema Displays and possibly a new Mac mini - though nothing has been confirmed by Apple. We'll let you know once OS X Lion is available in the Mac App Store. In the meantime, feel free to share your excitement in the comments below. 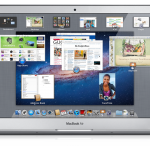 Apple Store Goes Down, Are Those Lion Paw-Prints?

Apple Store Goes Down, Are Those Lion Paw-Prints?
Nothing found :(
Try something else