You are using an outdated browser. Please upgrade your browser to improve your experience.
by Bryan M. Wolfe
July 18, 2011
Apple is working with Samsung and LG to provide a significantly better display for the iPad 3. However, at the same time, it looks like Apple is moving away from Samsung in terms of who provides it with memory chips, according to news first reported by The Korea Times. The iPad 3, which should arrive sometime in 2012, will include an “improved display to support quad extended graphics (QXGA), a display resolution of 2048 x 1536 pixels with a 4:3 aspect ratio provide full high definition (HD) viewing experience.” However, assuming this story is correct (remember, this is just a rumor unless Apple confirms the news), it looks like the iPad maker has no interest in using Samsung’s flat screens based on organic light emitting diodes (OLEDs). Instead, the company is said to be testing high-resolution QXGA screens using an advanced production technology based on the use of low temperature polysilicon. The same report suggests that while Apple remains committed to Samsung to provide it with LCD displays, it has decided to move elsewhere for memory chips. Accordingly, the company is said to be “shifting much of its memory chip orders to Taiwan Semiconductor Manufacturing Company (TSMC)." You may recall that the two tech heavies are embroiled in a patent lawsuit. However, the report doesn’t indicate that legal issues are the reason for Apple’s move away from Samsung chips. Besides:

Samsung officials insist the chances are ``very low’’ that Apple’s deteriorating link with Samsung in chips will eventually affect its appetite for Samsung screens.

The iPad and iPad 2 both feature 1024-by-768-pixel resolution, so it should come to no surprise Apple is working on a better screen for the next-generation tablet, assuming this report is correct. What do you think? Leave your comments below. [Photo: An iPad 3 Concept] 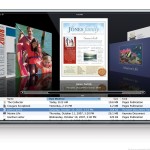 The iPad 3 Could Include A Much Better Display

The iPad 3 Could Include A Much Better Display
Nothing found :(
Try something else