You are using an outdated browser. Please upgrade your browser to improve your experience.
by Joe White
August 28, 2011
Facebook is holding its annual f8 Developer Conference on September 22, and it has been suggested that the social network will release its highly anticipated iPad app on this day. The news came originally from The Wall Street Journal in an article that hit the Web several days ago. The publication noted that Facebook's annual conference is this year scheduled for September 22, though iDownloadBlog first suggested that Zuckerberg et. al. might release the Facebook iPad app officially on this day, following its unofficial release some time ago. According to one spokesperson, Facebook holds f8 when the website has "something to talk about that developers will care about." Last year, Facebook unveiled the "Like" button at the event in April. As always, this year's event is a "developer-focused event," the spokesperson noted. Back in July, Facebook launched an in-browser video chat feature. More recently, the social network released Facebook Messenger - an iPhone app that allows users to quickly and easily send Facebook Messages to friends. Though the thing we most care about is the release of a native iPad app - something that has taken the social network a while to release. As always, we'll keep you posted. In the meantime, feel free to share your thoughts in the comments. 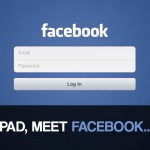