You are using an outdated browser. Please upgrade your browser to improve your experience.
by Joe White
August 29, 2011
A team of jailbreak developers has recently managed to install the Linux desktop operating system on Apple's A4 equipped iOS devices. The news comes as the image of an iPad running Linux was tweeted by one of the team's developers. A while back, we told you how the iPad was already more popular that Linux computers (in North America). Now, the two have "come together" thanks to the hard work of @BluerisEN et. al. The aforementioned tweet, which hit the Web several days ago, read:

So, we finally got Linux running on a mirror. :) http://ponyfac.es/1http://twitpic.com/6ayscz

The software isn't compatible with Apple's iPad 2, because the tablet sports a dual-core Apple A5 processor, as opposed to the A4 processor present within the iPhone 4, original iPad and fourth generation iPod touch. The great thing about this advancement is that it really could expand the older iPads' capabilities. A key issue many experience is Apple "outdating" older iOS devices. In a year or two, Apple could drop support for the original iPad. However, with Linux running on the tablet (obviously via a jailbreak hack), we'll still be able to make use of the device, and even run other operating systems such as Android on it. We'll keep you posted. [via iJailbreak] 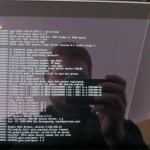 Jailbreak Only: Linux - Coming Soon To Your iPhone, iPad

Jailbreak Only: Linux - Coming Soon To Your iPhone, iPad
Nothing found :(
Try something else