You are using an outdated browser. Please upgrade your browser to improve your experience.
by Alexander Vaughn
September 27, 2011
Confirming earlier rumors, Apple announced this morning that they will be holding a special media event next Tuesday, October 4 at Apple's headquarters in Cupertino, California. This is very exciting news, as we're expecting Apple to announce the next iPhone at the event, possibly even two models: a high-end iPhone 5, and an improved iPhone 4S. The invitation, which states "Let's talk iPhone," seems to confirm there will be iPhone news. You'll appreciate the humor of the invite, which is composed of four app icons; they indicate the time, date and location, as well as the topic. The badge on the phone icon is believed to be a hint that Apple only has one new phone to show, but it's hard to say. As usual, we'll keep you posted on further rumors, and the event itself. (via The Loop) 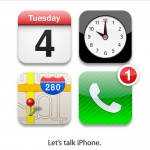 It's Official: Apple's Special iPhone Media Event To Take Place October 4
Nothing found :(
Try something else